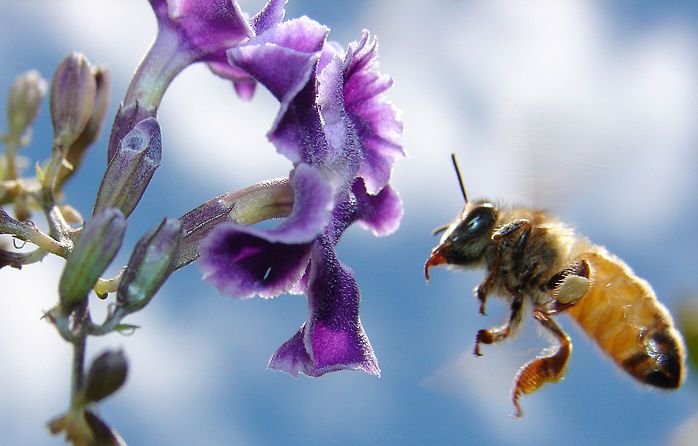 At 8pm on New Years Eve BBC Radio 4 broadcast the Earthwatch debate “Irreplaceable – the world’s most invaluable species” (listen to the original debate here). Five scientists battled it out to convince an audience that their group of species was more valuable than the other 4. The 5 speakers, their groups and their main arguments were as follows:

It seemed to me that bats were in the losing position from the beginning – the argument was pretty weak as immediately it was clear that bees pollinate far more species than bats do, and bats certainly wouldn’t win the ‘cute and cuddly’ vote from many members of the public. It also seems likely that they eat beneficial insects as well as pests. Primates, it also seemed, were in a pretty weak position. I find primates fascinating – their similarities to humans certainly make them very interesting and they would win the debate hands down based on cuteness. But the argument was really an argument about the importance of forests rather than primates so it didn’t win me over. Maybe they should have considered arguing for the importance of trees instead of primates.

Bees, fungi and plankton had stronger arguments. Fungi and plankton are often overlooked as they are so unappealing – rarely does algae tug at the heart strings! They’re also usually pretty small and mostly live underground or in the oceans, so we don’t notice them. But in their small and quiet way they are holding up life on earth. 90% of plants depend on fungi for uptake of nutrients through mycelia and plankton produce even more oxygen than land plants so are vital for life on earth. I did feel that they had a slight unfair advantage in that they are both such huge groups of species. Plankton include any drifting organisms in water, from marine viruses and unicellular diatoms to jellyfish; fungi include yeasts, molds and mushrooms, symbionts such as mycorrhizal fungi as well as pathogens and parasites.

However, the winner was bees. It helps that George McGavin is such an inspirational public speaker – after 3 years of lectures from him I couldn’t fail to gain some of his enthusiasm for insects – but more to the point, the argument was very strong. Here are some numbers:

He argued that without bees we would be living on bread and gruel – most fruits and vegetables are pollinated by bees, fish are in decline from over harvesting and conversion of energy from plants to meat is inefficient (for every 8kg of feed a cow eats, we get just 1kg of meat) – not much fun!

I agree with Robert Poulin and Serge Morand’s view that people have a responsibility to conserve all organisms (see Mark’s blog), but it is impossible for us to stop all species going extinct – it's a matter of prioritising. I certainly wouldn’t put the Guinea worm high on the list of priorities!

There is a limited pot of money for conservation efforts so we have to have a method of prioritising which species to conserve. The following are some of the factors that should be considered, in no particular order:

Take the Welsh whitebeam as an example. It is Britain’s most threatened species, listed as critically endangered by IUCN with 44 individual plants in 2 sites in Wales. However, it’s not charismatic, it’s not important to the ecosystem, it’s a hybrid so it could be reformed if necessary, it’s asexual so it doesn’t evolve quickly and therefore wouldn’t respond fast enough to habitat changes, and it has no plant defenses so herbivores love it. There really doesn’t seem much point in spending any money trying to conserve it.

The Sumatran Rhino is more controversial. It is one of the 3 critically endangered rhino species, the other 2 species being endangered and vulnerable respectively. Unlike the Welsh whitebeam, the Sumatran Rhino is charismatic – members of the public are far more likely to donate their money to Save the Rhino than they are to the whitebeam. But is ‘cute and cuddly’ a good enough reason? Should size matter? The number of Sumatran Rhinos is halving every year with approximately 200 left now. The price of it’s horn is going up which means that hunting is on the rise. A lot of money has been spent on captive breeding programmes but what are the chances of success if they are hunted faster than they can reproduce? Is there any value in delaying extinction by a few years? Would our money be better spent on conservation efforts that are more likely to succeed or on other charities?

Personally, if I had to choose which species (or group of species) to invest my money in conserving I would want to choose something that is important for the functioning of our ecosystem, without which our lives would be affected for the worse, and I would want my money to make a difference, that is, I would want there to be a high chance of conservation success. Many bee species appear threatened with extinction, mainly due to habitat alteration and disease (see Claire's blogs on 24 Nov and 3 Sept). According to George McGavin it would cost £8,000,000 to stop the decline of bees – “everybody will be able to eat and we’ll be able to avoid a global catastrophe”. Given their estimated economic value of £130 billion, this doesn’t sound like very much. It seems like bees would be a far more worthwhile target for conservation investment than we’ve given them credit for.