Will the Nile dry up? 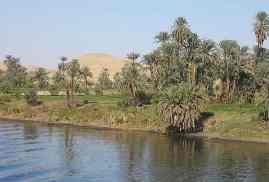 Scientists are unable to make up their minds about the impact that climate change will have on the future of the Nile. Specialists say Egypt is already facing massive water management challenges due to demographic pressures and rising demand for water and electricity, but it is unclear what affect climate change is going to throw into the mix, making predictions difficult.

"Some experts say that there will be water increase with more rainfall from the Ethiopian plateau, and some say there will be a decrease because of water evaporation. Until now, no specific research has been developed to determine exactly the impact of climate change on Nile water availability. All [studies] that have been published so far are only predictions" (Nahla Abou El-Fotouh of the National Water Research Centre in Cairo).

A 2004 report by the Organisation for Economic Co-operation and Development (OECD) said a rise in temperature of just one degree centigrade would lead to large evaporation losses and significantly reduce Nile flows and a large number of studies foresee up to a 70% decline in Nile water availability, whereas other studies project an increase in Nile water levels by 25% over current yearly levels due to changing rainfall patterns. For an overview of the research subscribers can search CAB Abstracts – a sample of some of these studies is in the list at the end of this blog item.

Egypt is extremely vulnerable to any adverse climate change impacts on water availability in the coastal zones and the Nile as over a third of the population is concentrated in these areas and the river Nile supplies 95% of Egypt’s total water needs for irrigation, and industrial and economic activities. If the Nile dried up this would have devastating effects for agriculture, food provision, drinking water and hydro-electric generation.

But don’t despair – new developments are offering methods of improving predictions. The UN Development Programme (UNDP), together with the National Water Research Centre and Egypt’s Ministry of Water and Irrigation, has developed a Decision Support System for Water Resources, which can be used "to develop future projections and to get a clear picture of how to use water resources. So if extreme scenarios happen, and whether there is an increase or decrease of Nile water flows, we are already prepared and know exactly what we have to do" (Mohamed Bayoumi, UNDP).

While most of the research until now has come from Western countries and institutions, the Nile countries are planning to initiate their own investigations in the coming years, and at the same time hydrologic models continue to be elaborated at UNDP: "We are elaborating regional circulation models which will give us more prediction on rainfall patterns and Nile water availability. But there is no answer yet. Everything at this moment in time is scientific speculation."

Coming soon from CABI!
Environmental Impact: From climate change to biodiversity loss – documenting man’s impact. This comprehensive internet resource will cover man’s impact on the environment, including climate change, biofuels, biodiversity, pollution, agricultural productivity, human health, economics, soil and water resources, habitat loss, deforestation and much more. It will include more than 1.1 million database records dating back to 1910 from around 5,500 serials plus non-serial content; CAB eBooks, reviews from ‘CAB Reviews: Perspectives in Agriculture, Veterinary Science, Nutrition and Natural Resources,’ a directory of climate change reports, a calendar of events and news items. Watch this space for more information!

A few articles appearing on CAB Abstracts about the affect of climate change on the Nile: