Since the MSC Napoli ran into difficulties two weeks ago, it’s not only the coastguard and Swedish emigrants who are having to repair the damage done.  One RSPCA centre had received more than 420 birds by Wednesday morning and up to 10,000 are expected.  Rescued guillemots are being given specialist care although many have been found dead, possibly from swallowing oil or becoming exhausted from having to paddle to shore.  The birds become less buoyant and can’t fly when covered in oil.  Sadly the survival rate of released birds is also low.

The CAB Abstracts database holds papers on the effects of previous oils spills, such as the Exxon Valdez in Alaska (1989), the Prestige oil spill off the Galician coast (2003) and the Iron Baron disaster (1995) on Hebe Reef in Tasmania.  The latter had a devastating effect on little penguins (Eudyptula minor), with 10,000-20,000 birds killed as a direct result, and many Brits were motivated to take to their knitting needles for the penguins’ plight.  Around 15,000 jumpers were knitted to keep them warm and help absorb excess oil from their feathers. 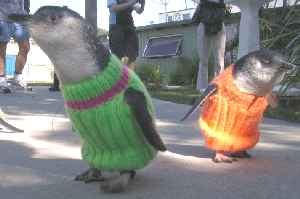 For those who want to help reduce the impact of the MSC Napoli incident, the RSPCA are asking people to provide towels and sheets and to contact them if they find oiled birds.